Thanks to your research you now have information regarding both the artist and artwork. Please read all the findings and then re-order the artwork from 1-20 (1 being your favorite-20 being you least favorite). Choose your top and bottom three and answer the following questions.


1. Did you order change from your original list in Assignment 1?


2. How does knowing about the artist or the reason why the artwork was made make a difference in your rankings? Or does it?


3. Do you think most artwork is made with a purpose other than just for the sake of the image itself? Why or why not?


4. Are you strictly a visual person, meaning do you solely judge a work of art based on how it appeals to your senses OR does meaning/story associated with the work of art play a role in the appeal of it.


5. After reading about all the artists, who was the artist you found the most interesting and why?


6. After reading about all the artists, who was the artist you found the least interesting and why?


PLEASE RESPOND TO THE QUESTIONS IN COMPLETE SENTENCES
and e-mail them to: bmedina@schutzschool.org.eg 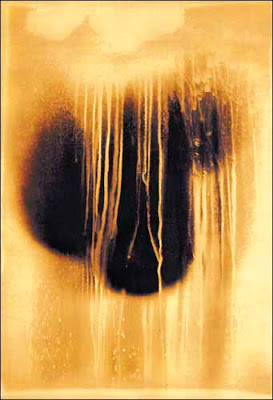 Artist: Yves Klein
Title: Untitled
Date of artwork: 1961
Nationality of artist: French
Media of artwork: Painting of fire
Significant of artwork: In 1961 Klein got permission to destructive laboratories in America, where he used it very creatively. He got the idea to represent negative impressions.
Source: http://en.wikipedia.org/wiki/Yves_Klein 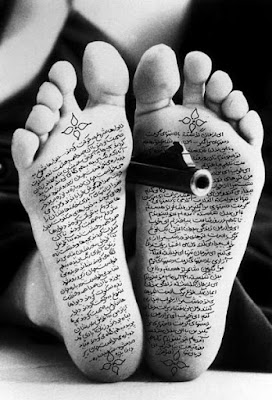 Artist: Sirin Neshat
Title: Allah's Women Series
Date of artwork: between 1993 and 1997
Nationality of artist: Iranian
Media of artwork: black and white photography
Significance of artwork: the series of artwork discusses the most violent assumptions of an Islamic femininity. Seeing that the artist has grown up during the times of the Shah of Iran and was present during the peak of feminism then exiled and forbidden from going back home after the total opposite party had power and brought along oppression. She used this series of artwork to express the Islamic women's mute and concealed femininity. Her photographs show and tell what has been forbidden to show and tell.
Source: http://www.iranian.com/Arts/Dec97/Neshat/
www.metmuseum.org/toah/works-of-art/1997.129.8 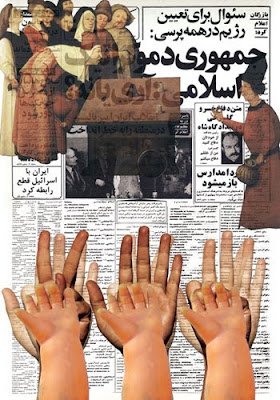 Artist: Jinoos Tayhizeden
Title: Rock Paper Scissors
Date: March 4, 2009
Nationality of Artist: Iranian
Media: Collage, newspapers and drawing
Significance: The artist wanted to mark the 30th anniversary of the Iranian Islamic Revolution. They illustrated the gap between hope and reality by having the newspaper include article about the revolution.
Source: www.guardian.co.uk/world/gallery/2009/mar/02/iran-islam
Source: www.aarangallery.com/artist.php?oid=34 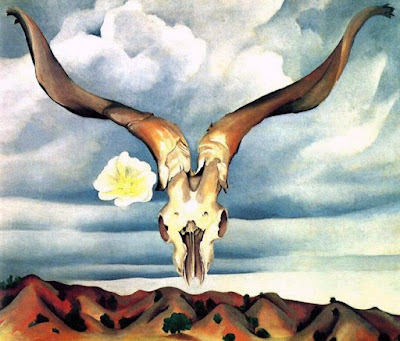 Artist: Georgia O'Keefe
Title: Ram's Head White Hollyhock and Little Hills
Date of artwork: 1935
Nationality of artist: American
Media of artwork: Oil on canvas
Significance of artwork: " I had looked out on the hills for weeks and painted them again and again—had climbed and ridden over them—so beautifully soft, so difficult. . . . I could see them—farther away—from my window in the rain. So I tried again. They seemed right with the Ram's Head. I don't remember where I picked up the head—or the hollyhock. Flowers were planted among the vegetables in the garden between the house and the hills and I probably picked the hollyhock one day as I walked past. My palntings sometimes grow by pieces from what's around." –Georgia O'Keefe
http://www.answers.com/topic/georgia-o-keeffe
http://answers.yahoo.com/question/index?qid=20090908212804AA2lh9m
http://artfor365.blogspot.com/2010/01/95th-day-rams-head-white-hollyhock-and.html 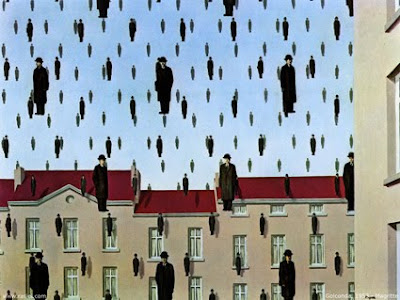 Artist: Rene Magritte
Title: Golconda
Date of Artwork: 1953
Nationality of Artist: Belgium
Media of Artwork: It is an oil painting on canvas.
Significance of Artwork: Magritte himself lived in a similar neighborhood and wore the same type pf fashion as the men in the picture. Golconda was given by Rene’s friend. The fame it acquired through being the center of the region's legendary diamond industry was such that its name remains, "a synonym for 'mine of wealth'." Also the men seem to be floating like helium balloons (though there is no actual indication of motion), against a backdrop of buildings and blue sky.
Source:  http://en.wikipedia.org/wiki/Golconda_(painting) 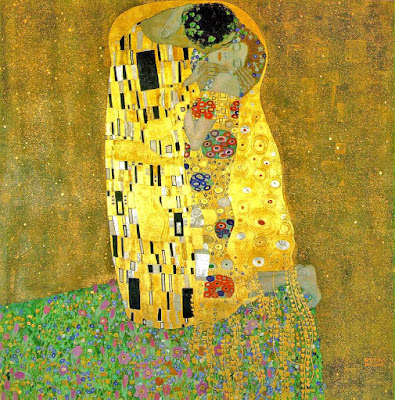 Artist: Gustav Klimt
Title: The Kiss
Date of artwork: 1908
Nationality of Artist: Imperial Austrian
Media of Artwork: Oil and gold leaf on canvas
Significance of Artwork: The Kiss is a discreet expression of Klimt’s emphasis on eroticism and the liberation therein. The Kiss falls in line with Klimt’s exploration of fulfillment and the redeeming, transformative power of love and art. The Kiss deviates from Klimt’s frequent portrayal of woman as the lascivious femme fatale.
Source: http://katebush.proboards.com/index.cgi?board=aerial&action=print&thread=2447 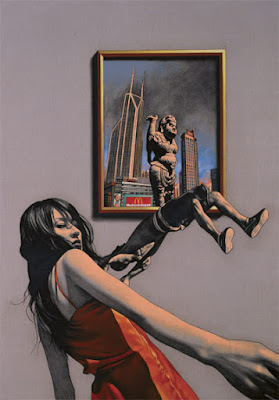 Artist: Zhong Biao
Title: Limb of Beauty
Date of Artwork:
Nationality: Chinese
Media: Charcoal and acrylic on canvas
Significance: Zhong Baio was a Chinese artist that using visual symbols caught China’s social reforms in his artwork. The image source of his artwork usually comes from experiences or symbols that relate to China such as the Cultural Revolution, sculptures representing china’s past victories, skyscrapers and other. Nowadays, with the development of technology, information has been received through art rather than through text. What makes Zhong Baio’s artwork distinguished is that he combines both familiar visual symbols, with cultural ideas. Zhong is not only trying to just have the symbols speak out for themselves in his artwork, but he wants to demonstrate the changes of the images through specific scenery.
Source: http://www.artscenechina.com/chineseart/artists/articles/zhongbiao.htm 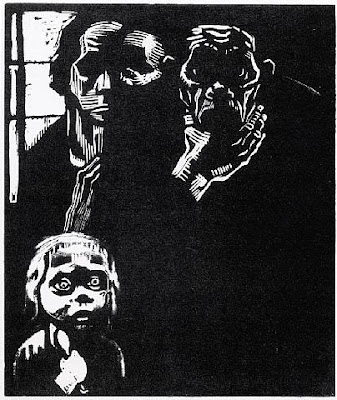 Artist: Kathe Kollwitz
Title: Hunger
Date of artwork: 1925
Nationality of artist: German
Media of artwork: Print
Significant of artwork: She expressed her direct emotional experience in her art and found many different ways to represent the human body.
Source: http://www.artnet.com/artwork/425094525/115183/hunger.html 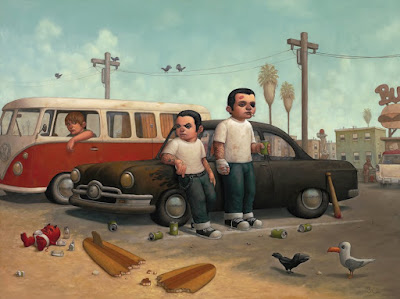 Artist: Bob Dob
Title: Hodads
Date of artwork: 2008
Nationality of artist: American
Media of artwork: pencil, paint on paper Significance of artwork: Hodads is a typical painting style of Bob Dob.Drawing of cartoons, the cigarette (a very important factor of his paintings), and especially the wasted demon on the floor.
Source: http://www.bobdob.com/?page_id=2 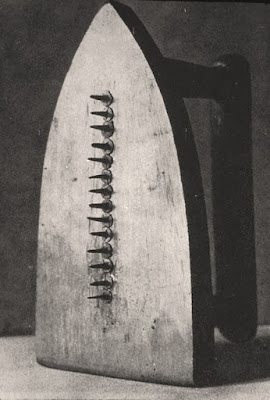 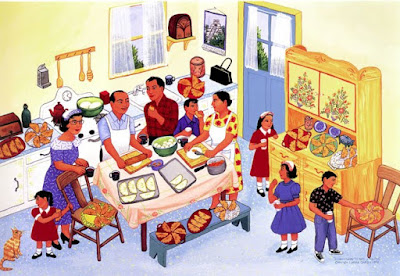 Artist: Carmen Lomas Garza
Title: Making Empanadas
Date of artwork: 1991
Nationality: Mexican American
Media of artwork: Gouache on cotton paper
Significance of artwork: The artwork shows a family cooking, or preparing meals. It is to be said she likes making paintings of family cooking or a family working together. It stands out in the perspective of the artwork. It slants towards the lower right.
Source: http://www.carmenlomasgarza.com/ 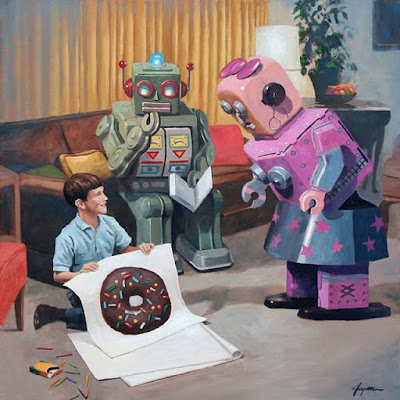 Artist: Eric Joyner
Title: Donut Logic
Date of artwork: 2008
Nationality of artist: American
Media of artwork: oil on panel
Significance of artwork: this artwork is different/significant than his other artworks because even though all his artworks have robots in them but this one replaces human life with metallic robots acting like regular humans.
Source: http://www.imagekind.com/MemberProfile.aspx?mid=8137896f-d854-4fc5-9ab8-e12215d22f1f
http://www.artbabble.org/video/robots-artist-label-eric-joyner
http://latimesblogs.latimes.com/jacketcopy/2009/01/eric-joyner-pai.html 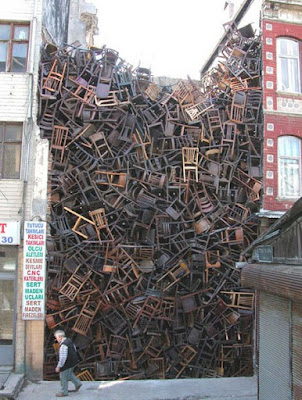 Artist: Doris Salcedo
Title: Chairs
Date of Artwork: 2003
Nationality of Artist:  Colombian
Media Of Art: Sculpture, chairs
Significance of Artwork:  The artists purpose of stacking up the chairs in the space between the two buildings chaotically was to pay a contribute to the people who were killed in the guerrilla coup that took place 8 years earlier. I think it’s a good contribution to the space between the two buildings because it was so obsolete and depressing. Now when you look at the space if you walk by something will catch your eye.
Source: http://www.whitecube.com/artists/salcedo/ 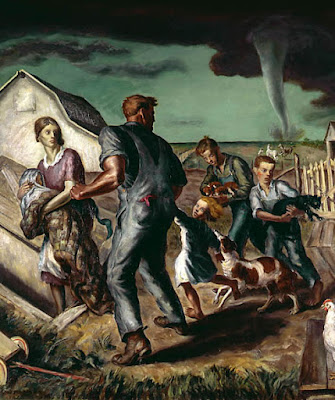 Artist: John Stewart Curry
Title: Tornado over Kansas
Date of artwork:  1929
Nationality: American
Media of artwork:  Oil on canvas
Significance of artwork: This painting shows a family running away from a tornado. Many people from Kansas did not like the painting because they thought this painting made Kansas look like a dangerous place.
Source: http://gardenofpraise.com/art13.htm 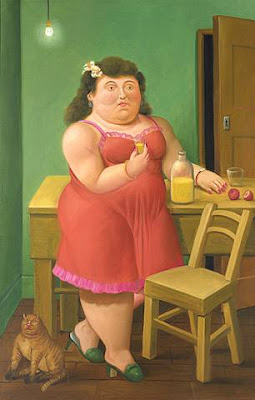 Artist:  Fernando Botero
Title:  Woman Drinking with Cat
Date of Artwork: 2002
Nationality of Artist: Colombian
Media of Art:  Oil paint, Canvas
Significance of Artwork: Botero answers that he doesn't draw fat people. He is not a "realistic" artist. We can see in all his paintings everything is fat or enlarged compared to something in front of him that he might be drawing. He likes to exaggerate. Botero such as other artists like Picasso likes to deform what he sees which makes him a rare artist due to his style and works of art. 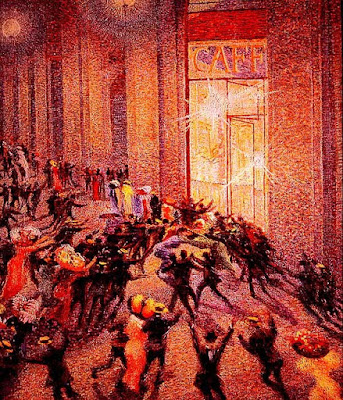 Artist:Umberto Boccioni
Title: Riot In Galleria
Date: 1910
Nationality of Artist: Italian
Media: hand painted oil on canvas
Significance: The artist wanted to respond to futurism since he was a futurist. The picture shows a riot that happened in the Galleria Vittoria in Milan.
Source: www.artcyclopedia.com/artists/boccioni_umberto.htm 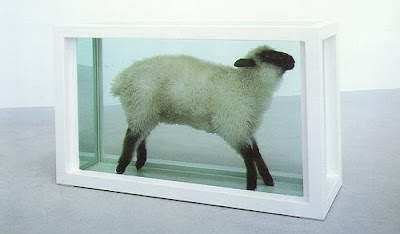 Artist: Damien Hurst
Title: Away From The Flock
Date of Artwork: 1994
Nationality: English
Media: Steel, glass, lamb, formaldehyde which is a colorless poisonous gas
Significance: The artist is trying to focus on how sheep are animals that have been giving us food and warmth for hundreds of years. The title “away from the flock” relates to “to leave the flock” which is a religious term which means to leave behind the protection of the church.
Sources: http://www.artchive.com/artchive/h/hirst/hirst_flock.jpg.html%20http://en.wikipedia.org/wiki/Damien_Hirst
http://www.nationalgalleries.org/collection/online_az/4:322/result/0/87212?initial=H&artistId=6043&artistName=Damien+Hirst&submit=1 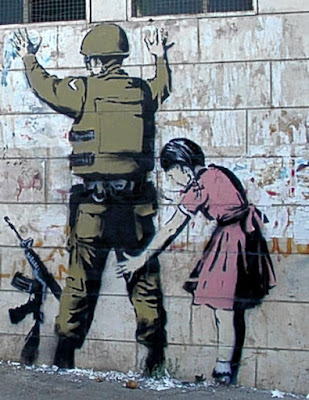 Artist: Banksy
Title: Untitled/Girl searching soldier
Date of artwork: (can’t find)
Nationality of artist: British
Media of artwork: stencil and spray paint
Significance of artwork: the significance in this artwork is that in real life the shoes should be switched because the soldier should have the power to search the pedestrian. His gun is lent against the wall so he is unarmed or not a threat.
Source: http://en.wikipedia.org/wiki/Banksy
http://www.briansewell.com/artist/b-artist/banksy/banksy-biography.html
http://www.popstarsplus.com/celebrities_bansky.htm 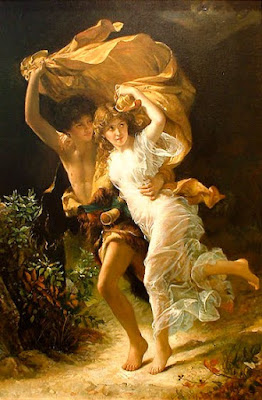 Artist: Pierre Auguste Cot
Title: La Tempete
Date of artwork: 1883
Nationality of Artist: French
Media of Artwork: Oil on canvas
Significance of Artwork: The painting is reminiscent of an earlier work, Spring, which was completed by Cot in 1873. This painting was subsequently acquired by John Wolfe after it was displayed with astounding success at the Salon of 1873. It is believed that the presence of Spring in Wolfe's collection was the impetus that drove his cousin, Catharine Lorillard Wolfe, to purchase The Storm in 1880. Both paintings are of roughly the same dimensions and are evidently related in subject in the sense that both portray a young, nubile couple. It is from this therefore, that the two paintings are thought to form a symbiotic pair, where the success of the earlier work led to the creation of the latter.
Source: http://en.wikipedia.org/wiki/The_Storm_%28painting 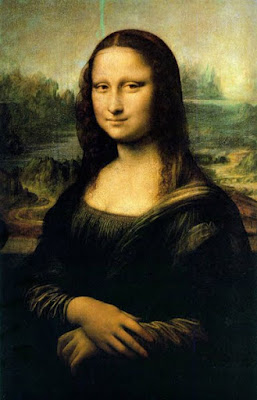 Artist: Leonardo da Vinci
Title: Mona Lisa
Date of Artwork: 1503–1506
Nationality of Artist: Italian
Media of Artwork: It is oil on poplar.
Significance of Artwork: Many critics note that Leonardo painted the most famous portrait of all time. The vagueness of the subject's expression, it is so important or enduring that people cannot fail to notice or be impressed from the composition and the delicate modeling of forms and atmospheric illusionism were novel qualities that have contributed to the continuing fascination and study of the work. This painting was one of the first portraits to depict the sitter before an imaginary landscape.
Source: http://en.wikipedia.org/wiki/Mona_Lisa
Posted by Bob Rob Medina at 10:10 AM